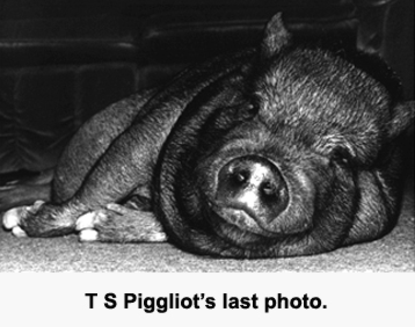 Our present membership is quite different.  They are nearly all "pet pig" owners and most of them are extremely devoted to their animals.  It seems strange to see adults ranging over the entire social, economic and gender range profess their unconditional love for these precious creatures.  Many of our members have other pets as well, but they will tell you that there is something very special about their little potbelly.  After we lost T.S. we received letters and calls from all over the United States, from acquaintances and from total strangers who were totally grieved at our loss.  Ten years ago I would have thought these people should "get a life", after all, "He was just a pet."  Today I question everything I ever thought about not only our relationship to pets, but also our relationship to all the other creatures with which we share this earth.

Anyway, what's it like to live with a potbelly pig?  To those who don't connect and also get a less than sociable pig, it could be something like this:  Pees all over the house.  Got so big I had to get a kiddy pool for a potty box.  Weighs damn near two hundred pounds.  Ate my business license off the coffee table.  Tore up my books and magazines.  Broke into the refrigerator, ate the potato casserole and drank my beer.  Took a bite out of my new end table.  Bit me.  Lost all its hair.  Ate rat poison.  Overdosed on chicken feed and nearly died.  Has mange.  I have mange.  Pried the lock off the food cabinet with a screwdriver.  Bit my wife.  Poked holes with his tusks in all the soda cans in the pantry and drained them.  Lost his teeth.  Vet says go to U.C.Davis (a veterinary teaching facility an hour or more away from where most of our members live) every time I call with a problem.  Had to buy a huge portable airline animal crate to transport him.  Had to rent a van to hold the crate.  Had to call all my friends to help me load the crate into the van.  Pig bit my friends.  Friends no longer return my calls.  Not cuddly.  Not playful like a dog.  Can't be free fed.  We can't go away for the weekend anymore.  Tusks and hooves have to be trimmed.  Needs shots.  Stubborn, demanding.  Screams so loud the neighbors think I beat my wife.   So, what's your point?

What are their good points?  Didn't we just cover those?  The above pig problems are all ones that my wife and I have dealt with.  Some of these problems have been brought to us by CPPA members asking for advice or help, but most of them were brought to us by the marvelous teaching pig, T.S.Piggliot.  Now not all pigs exhibit the above behaviors.  Our present four rescue pigs (Riff - 14 to 15 yrs. old, Chuckles - 13 to 14 yrs. old, George 13 yrs old, and Standlee unknown how old) have never even considered pottying in the house or trying to bite a human (other pigs, maybe).

People compare potbellies to small children more often than they compare them to any type of pet.  They are fourth in line of intelligence, way ahead of any other common domestic animal.  Fortunately pigs don't have hands to grip and manipulate objects or they might become more of a challenge than any of us would want.

Love from a potbelly pig is not easily or quickly given.  There is a certain accomplishment and definitely a uniqueness to having a pig curled up against you for an evening in front of the fire.  Unlike a dog who will curl up to anyone from their first day in the house or a cat who changes its mind weekly on precisely where or with whom it will lie.  The pig develops a trust slowly and forgives violations of this trust even more slowly.  The pig appreciates food, comfort and security.  Senselessly chasing a stick or unraveling a ball of yarn are usually not of much interest to a pig.  Work consists of that which is necessary to procure food, comfort and security.  All else is unnecessary.  A rather civilized outlook.  We may all know of people who chase sticks endlessly and unravel balls of yarn, but I doubt that we respect them for it.

As my wife has stated on many occasions, "I will always have a pig in my house."  Assuming that she's not referring to me (but not really insulted if she is), I must agree that life without one of these fellows would certainly be less full, less joyful and less loving.  They are truly none of the things that the breeders promised us they would be.  They're so much more.

”Animals are not brethren, they are not underlings; they are other nations,
caught with ourselves in the net of life and time,
fellow prisoners of the splendor and travail of the earth."
Henry Beston

Zen and the Art of Being Owned By a Potbellied Pig

Having been asked almost daily for the last twenty-six years, "What's it like to have a pet pig?"  I feel a need to attempt to answer this question.  It is similar to the question of the '60s (for those of you as old as I am), "What's it like to do drugs?"  There is no answer.  One person's nightmare is another person's heaven on earth.  My drug of choice has four hooves, a straight tail, cute little suction cup snout, and a pot belly just like mine.

In the "California Potbellied Pig Association" (CPPA) we get calls all the time from disenchanted potbellied pig owners who thought they would be getting a cuddly 35 lb. attention getting "ugly dog".  My wife and I entered into pig ownership with very much those same expectations, but somehow we managed to adjust and got more than we ever bargained for.  Much more.

Our late T.S.Piggliot had almost all of the negative traits that we have ever heard of from other pig owners.  He was a negative pig ownership test vehicle who drove himself deep into our hearts.  He took two years to potty train, had bad conformation with weak spindly legs.  He was extremely aggressive, and I've never missed anything or anyone as much as I miss him.

What makes these animals so special, or are they?  I hear people speak of dogs and cats with as much fervor as I hear people speak of their potbelly pigs, but for me there seems to be a different edge, an intangible feeling when people are really connected to these porcines.  When we first started meeting other pig owners through CPPA most of the members were breeders who, while they may have had "pet pigs", were mostly looking at dollar signs.  They seldom showed that glow of love we see so often in "pig people", and they didn't want to discuss negatives like size and aggression.  Fortunately for them it takes a few years for size and aggression to become serious problems and by then people are either really attached to these animals or have given them to someone else, and two years later most of the breeders were out of business anyway.