Editor's Note:
On 3/21/12 Standlee caught a warm spring breeze and traveled into his sky.  He had been suffering from more of his lifelong seizures and was starting to have trouble locating his pig door and even his food dish.  We would have to stand him on his feet and then guide him to where he needed to go, balancing him so he wouldn't fall down.  Most of his feeding had to be done by hand.  He did finally learn to totally trust us and continued to be the gentlest potbellied pig I have ever seen.  When he could no longer stand at all, we knew it was time.

In his life he was interviewed by famed animal communicator, Penelope Smith.  His soft sounds were recorded for the voice of the Woola in Disney's "John Carter" movie, and his hoof trimming screams appeared in "King Kong" and other movies.  He was also featured on Mariette Hartley's TV Show, "Wild About Animals".  Our biggest concern for Standlee was whether he was happy or not.  It was so hard to see him screaming through a seizure, but so rewarding to have him come out of one, allow you to hold him and gently talk him back to calmness. He lived with us for nearly 14 years and appeared to be at least five or more years of age when he was rescued.  He lived a long life, and left a big hole in our lives.

"The paradise of my fancy is one where pigs have wings."
G. K. Chesterton

Standlee came to the California Potbellied Pig Association in July of 1998.  He was delivered to our house in a near traumatic condition, and has never fully recovered.  What we know of his life before he came into our lives is very sad.  He apparently lived in an open pen area with two other sibling pigs.  He was probably tossed scraps as he didn’t know how to eat from a bowl.  We do know that his owners got evicted from the property.  After the eviction a man sent to clean up the property found the evicted tenants in the pig’s pen with a backhoe.  They had apparently been unable to figure out what to do with the pigs when they were evicted, so they had returned with the backhoe to dig holes and bury the pigs alive.  Two of the pigs had already been buried, and they were in the midst of dumping Standlee into the third hole when the man hired by the property owner stopped them and ordered them off the property.  They dumped poor frightened Standlee from four feet off the ground and left.

The clean up man managed to round up Standlee and get him in the back seat of his Cadillac.  Leather seats and all.  He took Standlee to his sister’s ranch.  There Standlee was given a bath, and CPPA was notified.  We agreed to temporarily house Standlee at our home until he could be transported to our foster in Sonoma.

Standlee was originally named Stanley, but because of his traumatized condition, he would often just stand in one spot for hours softly crying.  He hated to be touched and would scream if anyone tried.  It was as though his skin hurt.  We got him up to our foster in Sonoma, but his condition didn’t improve.  We finally found him a good home, and he was returned to us so he could be transported there.  We very quickly realized that the new home he was scheduled to go to wasn’t going to work for a pig in his mental state.  He was going to need a very structured and controlled environment.  So he stayed with us.

Slowly he learned to eat food from a bowl without throwing it all on the floor first.  For the first few months I had to scoop the food in my bare hand and place it in his mouth.  The first time I did it, I just assumed I was in for a serious injury.  But Standlee just gently sucked the food off my fingers.  Soon he was eating on his own, but he always leaves enough in his plate for me to have to scoop up a finger or twos worth and place it in his mouth.  He has also learned to follow a few simple verbal commands (like “circle”), which he seems to like to show off for visitors.

Standlee is a white pig with some black skin markings under his white hair.  Often referred to as a “blue butt”.  We have no idea of his age.  It has taken nearly seven years for us to get him to let us pet him for any more than a brief touch.  He doesn’t have as many nightmares as he used to, but the only time we are really able to hold or comfort him is when he’s screaming in his sleep.

Standlee is ever so slowly gaining some confidence.  He will even occasionally stand up to his evil partner, George.  For years George would make Standlee sleep in the outside house, but now we find them cuddled together inside on the same mattress.  Occasionally, we’ll even find George tossed out of the bed. Standlee’s greatest joy, however, seems to be going outside on a warm spring night as the sun is sinking and the world is quieting down and just standing, looking at the sky and thinking deep pig thoughts.  Maybe he’s remembering his siblings or maybe he’s being thankful for what he has.  I know we are constantly being thankful that we have Standlee. 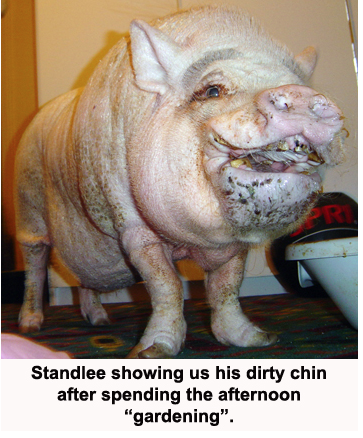