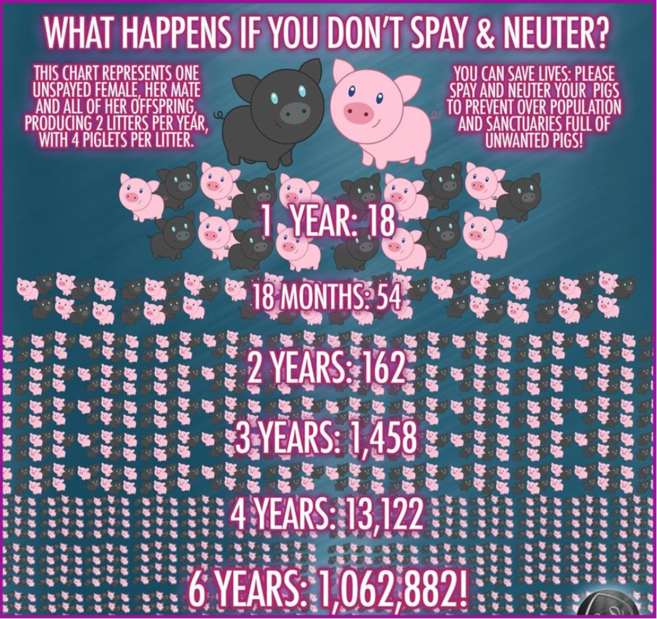 This is an article that appeared in a recent SCAMMP (http://www.scampp.com/) newsletter.  Dr. Vered does an excellent job of explaining from a  medical professional's point of view the necessity of spaying and neutering your pet pot bellied pig.  Included at the end of the article is a chart showing potential birth rate of an unspayed female potbellied pig.

Recently, I saw a client that just purchased a two month old, female pet pig from a local breeder. The new owner brought the pig in for an initial health exam.  Everything turned out normal and I advised the client about general care and future vaccines and deworming.  I also recommended when the pet is between three and four month old to get it spayed.  The lady looked puzzled at my suggestion and said that her pig is the only pet at her home and that she does not see a reason to put it though "unneeded surgery just so the vets came make more money."  Beyond that, she did not think that we have the right to take away the animals sexuality and ability to reproduce!

I had to explain to the client that personally, I do not agree with the ethical and moral aspect of her comments (but I respect other people's right to their philosophical opinion), and that on a medical level her knowledge is flawed and lacking.

I will keep my ethical opinion on the matter of a pet's right for reproduction to a minimum.  I want to say that veterinarians take an oath to care for animals and act on their behalf and none of us do un-necessary surgery on animals to make more money.

As for the medical aspect, both castration of male pet pigs and spaying of females are important for everyone to understand.  Neutering surgery does remove the sex hormones out of the body and alters some aspects of the animals behavior.  Unfortunately, most of those behavioral traits make both male and female pigs very hard to live with as pets and usually lead to owners wanting to get rid of the animal.

Adult male pigs can become aggressive and mark their territory with urine and pheromones.  If no female pigs are available, they try to mount and hump other animals and people which is unpleasant and can lead to injuries to both the pig and the other animals.  The boar develops very thick skin and has several glands that secret materials with very strong and bad odor which hangs in the environment.  Their tusks grow larger and faster than neutered males' and unless they are taken care of, can cause oral problems to the pig and pose a risk to humans and other pets who are in contact with the pig.  Older boars have a high rate of penis, testicular, prostatic, and preputial diverticulum medical problems. Those include infections, abscesses, prolapses, and cancer/tumors. Castration prevents all these conditions.

Intact female pigs cycle about every three weeks from the time they are about three months old.  Most of them show personality changes when they are in heat.  Some are aggressive, bite, nip, some are moody and go off feed and get quite vocal.  Often they lose their house breaking and urinate all around.  There have been cases of pigs in heat breaking out of their pens and yards and straying, getting lost and being hurt or killed.  Many years ago, a client of mine who was a pig breeder, found an unknown female pig in her boar pen.  It turned out that the pig belonged to people who lived a few block away, was in heat escaped from their yard, found the boar down the street and got pregnant.  She was too small to deliver the babies and ended up needing a C-section.  The owners did not want the piglets and turned them and the mother over to a rescue group.  We already have a problem with over population of pigs who end up in rescues needing homes and there is no reason to contribute more to this issue.

Unaltered female pigs tend to suffer several medical problems of the reproductive tract which are influenced by the constant hormonal changes.  They are prone to bladder and uterus infections including life threatening conditions like pyometra (pus in the uterus) that require emergency surgery.  They are at high risk of uterus muscle and ovarian cancer. Mammary gland infections, abscesses and cancerous tumors also occur quite often.  All these diseases are not present or extremely rare in spayed pigs.

So with all this information, ethical considerations set aside, I still think that it is the obligation of every veterinarian who treats pet pigs to recommend to their owners that they get their animals fixed at a young age.  My preferred time is about 6-8 weeks of age for the males and 3-4 months of age for the females.