Back in the early 1990s a cute little black and white piglet was purchased by a college girl.  She named him Chuckles, probably because he made her laugh.  When she returned home from college, her father told her that she was welcome, but not her pig.

She contacted a friend of hers who had dogs and horses, and her friend said she’d temporarily help out.  As it turned out her dogs were even less enthusiastic about having a pig in the household than her friend’s father had been.  The college girl couldn’t take Chuckles back and the friend’s dogs were probably going to kill him.

The friend managed to find him an empty stall at Tanforan Race Track where Chuckles was secretly housed next to costly racehorses for nearly a year.  Everyone spoiled him with horse oats (not a healthy diet for pigs) and snacks.  Chuckles is not the type of pig who asks for much from this world, so we can assume he was having a happy life.  Of course like most things in Chuckles’ life, this was bound to end.  He was finally discovered in the pen and once again evicted.  In mid 1994 CPPA was contacted about his predicament.

Fortunately we had recently been talking to a family that wanted to adopt a pig.  CPPA managed to put the parties together and Chuckles once again had a home.  We helped his new family set up a pen for Chuckles and get him settled.  This was our first time actually seeing him, and he was a perfect potbellied pig.  Not too big.  Perfect mix of black and white coloring.  Good confirmation.  Excellent slightly shy personality.  Absolutely no aggressive tendencies.  He was a love.

His new family kept him in a pen in the front yard.  Our only suggestion to them was to try and get rid of the foxtail grass that was growing around his pen.

From what we saw and heard Chuckles was once again leading the good life.  He seldom had to spend a night in his pen, because the young children in the family would sneak him into the house to their room for the night after their parents had gone to bed upstairs.  Every morning there would be bits of hay leading from the front door to the children's bedroom.

His good life lasted for only a few months when we received a call from his new owners saying that something was wrong with his eyes and that their home had been foreclosed on, and they were having to move. We went to their home, removed a number of foxtails from Chuckles’ eyes and took him back to our house to recover in a foxtail free pen.

We never heard from his owners again.  We lined up another new home for poor Chuck, but when the new owner arrived to meet him, Marcie, my wife, couldn’t give him up.  So Chuckles joined T.S.Piggliot and the Sheriff of Rottingham (Riff) as our pet potbellied pigs.  T.S. was both the boss hog and a bossy hog, so Chuckles teamed up with Riff to help withstand T.S.’s wrath.

At first we mistook Chuckles’ quiet, passive demeanor for a lack of intelligence.  Big mistake.  Chuckles can truly never be described as lacking in intelligence.  You might describe him as sly, cunning, sneaky, but never as stupid.  He gives off the persona of a “Cruiser Dude”, just cruisin’ through life, but believe me he sees and understands everything he’s cruisin’ through.

When the thanksgiving dinner ends up on the floor because someone cruised by and pulled on the tablecloth, it’s Chuckles.  When the bags of candy somehow end up off of the chair and spread all over the living room, it’s Chuckles.  When Chuckles wants to go somewhere or do something, stopping him is like trying to stop a tank.  If he sets his mind on something, you might as well just let him do it.

Often Riff and Chuckles will join together to perform some mischief.  We had always accused Riff of being the instigator, but we’ve learned to be not so certain about that.

Many years ago we discovered that Chuckles’ early diet of oats had damaged his bones causing him to have severe arthritis in his leg joints.  The doctors gave him a very limited amount of time before he would be unable to walk.  They felt that we should put him down, but we felt he wanted to live.  We called his meals the “chemistry set” for all the additives we put in them, and after ten years he was still going strong.  About a year and a half ago he developed a persistent case of pneumonia.  We found that he had a mass in his chest pressing on his heart and right lung.  Between his arthritic legs and the growth in his chest, we figured this was it.  The vets gave him some antibiotics, pain pills and a few months to live.  A year and a half later his “chemistry set” has gotten more complex, but he still comes down the ramp from the sleeping area he shares with Riff, to join us in the living room at night.  He still slowly patrols our backyard for grass and bugs, and he stills tries to outsmart us every chance he gets. 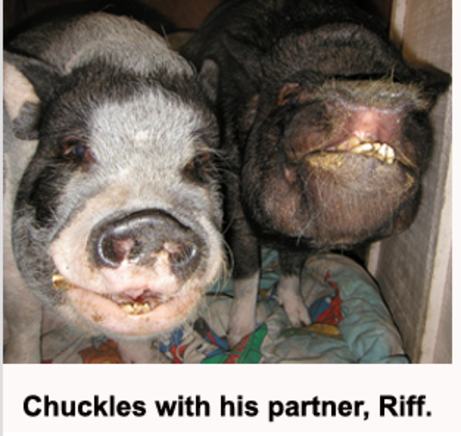 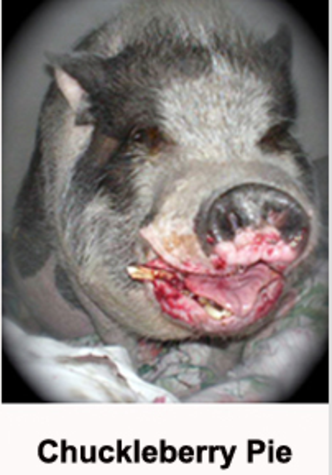 As he’s gotten older his step is slower and shorter.  He’s a lot less active, but he gets up and tries.  I think he loves his life, but I also think he keeps fighting his pain, because he knows how much Riff and we would miss him.  At least I’m sure he now knows after 13 years with us that he has found his permanent home, and a much poorer home it would be without him.

Editor's Note:
In May of 2008, Chuckles decided the fight was over.  At 15 years of age, 11 years after he was diagnosed with terminal arthritis and  over two years after he was given 3 to 7 months to live because of the large mass in his chest cavity, Chuck started running a high fever and stopped coming into the house.  He had pretty much stopped eating, but when he was offered his favorite, a full boysenberry pie, just for him, his appetite returned for his final treat.

Now Chuckles was rather used to and rather liked ISO gas and any other sedatives or pain pills he could get us to give him.  So when the doctor injected him with a rather massive dose of sedative to put him soundly asleep, the vet was rather shocked that Chuck just seemed to be enjoying the high.  When Chuckles finally settled down and appeared to be asleep, my wife said, "You asleep Chuckles?", to which he answered with a loud grunt.  We all laughed and Chuckles got what he wanted, some more of those good drugs.  He finally fell asleep and let the doctor do what he was there for, but not until he made us and even the doctor euthanizing him laugh that one more time.  That's why he was named "Chuckles".

"The paradise of my fancy is one where pigs have wings."