by Steve Jenkins and Derek Walter 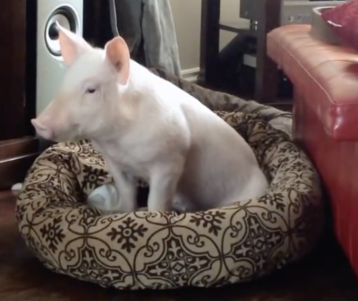 Steve:  Hello everybody. As we were going through messages over the past couple of weeks, we have noticed a really big increase in the number of messages saying they are interested in a potbelly pig and bringing a pig into their family. Now that kind of hits us two ways, there is part of us that thinks that it is absolutely amazing, but it’s also very very concerning because as you know Esther is a mini-pig, at least that’s what we thought,

CPPA would like to extend its thanks in the name of pig rescues and rescued pigs everywhere for an excellent and informative broadcast from "Happily Ever Esther Farm Sanctuary".  Follow Esther's adventures on Facebook, read her story in her book "ESTHER the Wonder Pig", and support Steve and Derek as they share the challenges and joy that only a pig can bring.

Pigs are extremely sociable, enjoying good company,
even if it belongs to another species.

...and here she is 650 pounds later. We were in a very unique situation that allowed us to keep her. We both worked for ourselves, we were able to make time for her and adjust our schedules, to dedicate the time to her that she required, and to make it work. It was the hardest thing that we have ever done. If we could go back I don’t think I would change anything but at the same time, if I had known the day that I picked her up, what was about to happen, I don’t know if we would have gone through with it. It’s really hard to say. Esther is not at all what we were expecting, and a lot of people find themselves in the same position, not necessarily with a 600 pound pet pig. But pigs are so clever and they are so much more work than people anticipate, that upwards of 90% of pigs that are adopted end up in shelters or otherwise abandoned. It is a huge, huge problem so please, please do some research if you are considering bringing a pig into your family. They will change your life in amazing ways but they will also change your life in some challenging ways and you need to be prepared for that. You will become their everything.

We heard a story once about a pig dying of a broken heart, at least that’s what his rescuers thought, as he was a perfectly healthy young pig that was abandoned by his family and passed away for no reason a few months later. Pigs develop really strong connections with their people, and they don’t make new friends all that easily. Esther and I have an unbelievable relationship, but there are not very many other people who have that relationship with her, and I know that a lot of pigs are very much the same. So when you give up on them, it’s incredibly hard for those pigs. So please!! Do lots of research to know what you are getting into, and if you do decide to bring a pig into your family, consider adopting one, because like I said there are so many in shelters. We here at Happily Ever Esther Farm Sanctuary, filed literally dozens of requests every single week, asking if we have space for their pot belly pig that just isn’t working out. So shelters are flooded, sanctuaries are flooded, it’s a huge problem. So if you are going to bring a pig into your family, if you are ready to make that commitment, please consider going to a shelter or speaking to your local sanctuary and finding out if you can get one that way, because there are so many amazing pigs that are in need of a home through no fault of their own. That’s definitely the route to go.

And the next portion of my message that we’re probably going to get a lot of hate for, but this is directed at the Breeders out there. Like I said you guys know that 90% of these pigs are ending up in shelters, which means you’re not doing a good enough job of educating the people that come to you and ask you to bring a pig into their family, because they are not prepared enough. If they were prepared enough then that abandonment number would come down dramatically. So please, step up your game and do the right thing. If you love the animals as much as you say you do then  a) stop breeding them, there are so many in shelters and there is absolutely no need for it. Please consider adjusting your business and maybe rescuing some of these pigs sitting in shelters and making that the avenue that you go. Rescue these pigs and adopt them out, help them find homes. There’s no need to bring new pigs into this already ridiculously flooded and problematic area. I don’t even know how else to explain it, it makes me so upset to think that people would pass these pigs on and not properly educate the person that you are giving them too. You’re sending the people home with false feeding instructions, false hope that this pig is only going to be 50 or 60 pounds, and then all of a sudden the pig is in a shelter because you did not do your job. So please reconsider how you operate your business and how you educate people when they come to you. That’s the very least that you can do if you want to continue breeding animals. Like I said there are so many other options and the absolute best thing that you can do is to stop altogether, adjust your business, start rescuing pigs from shelters and re-homing them. That is what’s really needed. We do not need more baby piglets in a completely flooded industry, so please keep that in mind. And like I said, if you are going to bring a pig into your family, or bring a pig home, congratulations, if you know what you’re in for and you’re ready to do it, it will be the most amazing experience of your life.

They are so smart, so funny and so clever, they are all of these wonderful things. But like I said they are so much work, it is NOT like bringing home a dog, it’s not something that you can just leave in a crate while you go to work for eight hours a day, five days a week. It takes a lot more than that, so they are not for everybody. Please don’t feel bad if you can’t do it, it’s just important to know that you can’t do it BEFORE you adopt and you and your pig ends up in a really bad situation. It’s also incredibly important to check your Municipalities zoning bylaws. Derek and I got really lucky, we lived in a place where Esther was illegal but we had done a very good job of keeping her quiet, believe it or not, even after the social media page came out. But we knew we had to move, and we made it very public that we needed to move, so the town didn’t bother us and they gave us time to allow us to do what we needed to do and we got out of town into the country, thank goodness, and thanks to god knows how many of you guys that allowed us to start this sanctuary. But like I said, we are a very unique case and not everybody has the ability to do that for  a) for raising Esther and  b) for being lucky enough that we were able to get out of the city and into the country to start this amazing Sanctuary, our circumstances were very unique. So please don’t think that Esther is an example of what you should or could be doing. Esther is a very very unique case based on our situation, both now and when we first got her. I could not fault anybody who ended up in our position for not being able to keep her. It was nearly, well, like I said, it was the hardest thing we ever did, and we nearly couldn’t do it, but we made it work, and for her, we made that commitment. Animals of any kind, be it a dog, a pig, a cat, they are a life-long commitment, you are making a commitment to them for life, and not just for the novelty of having a baby animal in your house for a little while. So that’s that.

Sorry this is a little bit of a downer live feed compared to what we usually do, but it was super important because I was really really concerned that over the next few weeks there are going to be dozens and dozens, if not hundreds of people, picking up these adorable little piglets that in a few months are going to find themselves in Shelters. So if you’re one of those people, please consider what you’re doing, know what you’re getting into, know that it will be amazing and awesome but they are incredibly challenging, they take a lot of work, they take a lot of time, and they take a lot of patience. So know what you’re in for and please consider adoption. There is no reason to go to a breeder when shelters are literally overflowing with pet pigs.

So thank you so much everybody, I’m going to go and grab a little snack for Esther so we can leave you with something at least a little exciting at the end of this life feed. We’re back, what’s this Esther pig, say hello Esther pig. Esther is having a pretty lazy day today, it’s actually fairly mild outside compared to the cold we have had for the last few days, so we went for a walk this morning, didn’t we monkey. We went for a walk and she was hilarious because we went on a trail that was a dead end and it was only two feet wide so she wasn’t able to turn around, and she didn’t want to step into the deep snow, so she actually backed up about a hundred feet, she put it in reverse for a hundred feet hahaha, until the path became wider and she was able to turn around without having to step into the snow. Eh special girl. So she’s in having a nap, thank you so much guys for tuning in and thank you for listening to what was not the happiest as most of our live feeds. But I thought it was a super important message and I hope you will all consider what I have said. So that’s that, we’re going to leave you, have a wonderful day, 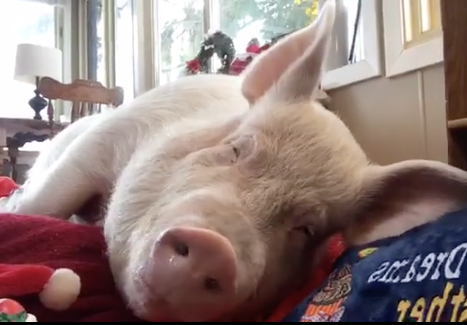 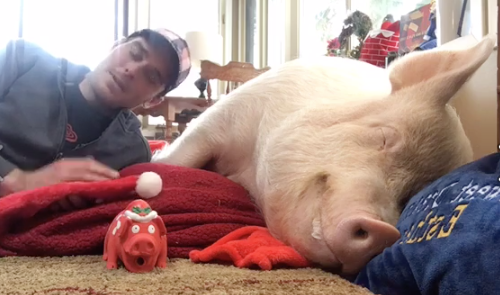 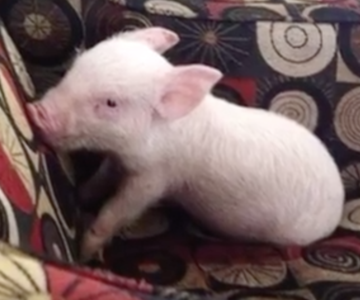