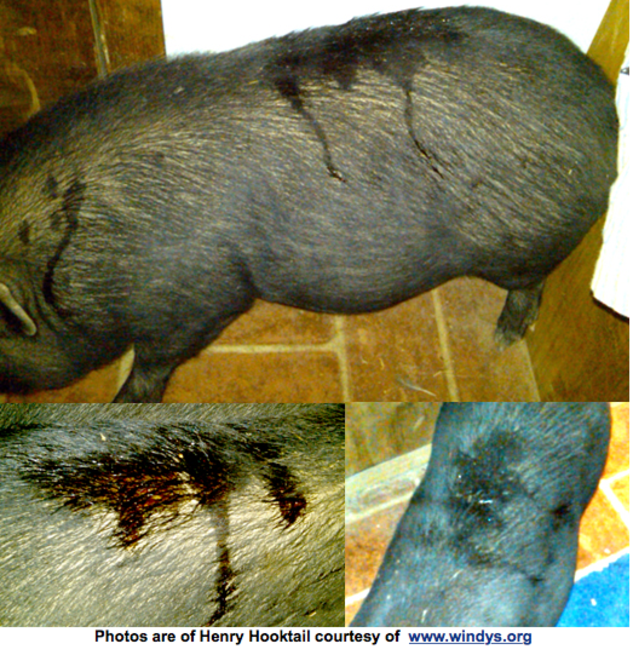 Editor's Note:  We recently had one of our pig friends, Mike, in Southern California contact us about his 13 year old pig, Peggy.  We usually find DPS in younger pigs, but this appears to be an exception to that.

"The reason I'm writing is to let you know that Peg, at 13 years old, just came down with her first case of Dippity Pig. It was so hard to watch her in such discomfort. It didn't even occur to me that it could be Dippity Pig because she's a senior-citizen piggy, but then I spoke to my beloved pig doctor and she mentioned that it sounded like I was describing Dippity Pig. And sure enough, Peg had all thesymptoms: the red scabby lesions, the oozing fluid, the itch/pain/discomfort. Thankfully it seems to have run its course.”

Another of our members has a pig with a sensitivity to sunlight that manifests exactly like Dippity Pig Syndrome.  Perhaps this could tie in to the prevalence of Dippity Pig cases in early spring when many pigs are starting to sunbathe after the sunless winter.  A European CPPA member from Latvia sent us these excellent videos of her pig suffering an attack of what we are quite certain is Dippity Pig Syndrome.  The pig is fine now.

Take two pigs and call me in the morning.

It's Spring.  I can tell because the calls about Dippity Pig are coming in.  The medical term for Dippity is Erythema Multiforme.  Literally translated it means: a superficial reddening of the skin, usually in patches, that takes many forms.

While Dippity can vary in character and severity from pig to pig, there are certain definite symptoms.  There may be a sensitivity to being touched around the back end of the pig sometimes to the point that the pig squeals when touched.  It may have a "hunkered-down" stance with the tail tucked between the back legs and clamped to the body and weakness of and/or inability to use the back legs to the point of falling down, pain, restlessness, distress.  These may or may not be accompanied by moist, red areas appearing over the rump region and extending halfway up the back toward the head. These moist areas sometimes turn into actual lesions that can ooze serum blood.  They usually run from side to side, not head to tail.

The onset of symptoms of Dippity is often quite sudden.  The weakness and sensitivity in the back legs can occur in a matter of hours.  A perfectly normal pig can be incapacitated three hours later.   Any skin eruptions or lesions can occur in a matter of minutes.  Depending on the pain threshold of the pig and the severity of the case, the animal ends up anywhere from uncomfortable to screaming with pain.

The primary cause of Dippity appears to be stress. It is not clear whether the stress is external or internal in nature, or whether it can be self-induced.

External stress could include a pig show, a trip to the vet, the introduction of a new pig or owner, a violent thunderstorm or a sudden deviation in normal routine.  There also appears to be some correlation between Dippity and exposure to the sun. (As a side note, we were recently contacted by a pig owner whose pig was having these same symptoms apparently due to sun exposure.  The pig could not be exposed to sun at all or the symptoms will begin.  This also ties into that Spring is when the cases start.  Pigs that have spent the Winter indoors are outside sun bathing.)

Internal stress could mean an inappropriate diet or a change in diet, inadequate water supply, a sudden drastic change in body temperature due either to illness or climate, even the onset of a particularly hard heat cycle for the female pig.  Often the triggering of a Dippity episode can be traced back to an unusual recent event n the pig's life.

There is no treatment for Dippity, nor is there any preventive medication available at this time since the exact causes have not been determined.

Topical creams or sprays can encourage healing of the sores and lesions.  Injectable drugs can be used to alleviate discomfort or pain.  However, once Dippity occurs, no drugs will prevent it from running its course.  The on-set of Dippity is quite spontaneous.  Duration of symptoms can be anywhere from 24-72 hours.  Complete recovery is just as spontaneous and mysterious.  Spring and summer seem to be the most common times of year for Dippity to occur.

More often than not it is younger pigs who are affected--that is pigs under two years of age.

The most important thing you can do for your piggies if Dippity strikes, is to immediately reduce stress, both internal and external.  Confine your pig in a suitable temperature for the time of year.  A quiet, dark place does a lot to calm your pig.  Low music helps to soothe also.  Keep your pig well hydrated during the episode.  Reassure and comfort your pig often, but complete rest is a must.  Prevention of sunburn can be accomplished by using a sunscreen on your pig.  If lesions are present, liquid vitamin E or aloe vera jell are soothing and healing.  Some vets prescribe topical 1% hydrocortisone cream.  Consult your veterinarian as to the appropriateness of drugs to alleviate discomfort or pain.

Dippity can occur as a single, one-time event, or a pig can suffer multiple attacks. Seldom does it occur in older pigs, even though they may have been affected as piglets.  Perhaps they outgrow it.  In seven years, I have never heard of any lasting ill effects from this mysterious condition.  For pig's who have had Dippity more than once, there is a check list available to help determine the causes and possibly provide preventive measures.

Photos of Dippity Pig lesions.  Lesions will not always be present